Welcome to my Blog!

The parents Matt and Jenn

Our middle girl, full of energy and spunk, Isabel Marie

Jenn
I figured that this would be a good way for me to share pictures and stories with my friends and family, without bombarding their inboxes with mass emails. This way if people are interested they can come and see what all is going on with my life and my sweet little family. I hope to make it enertaining, but I can at least promise loads of kid pictures to be added regularly! Which is I am sure the only reason half of you are reading this :)

Lily is a girl who LOVES her dinosaurs, and trucks and other boy toys.  I thought it was funny the other day when I went into her room and found that my tom-boy had been accesorizing her dinosaurs.  Definetly a girl toy now right? 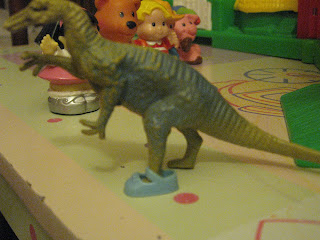 Yeah, so if you haven't noticed, I haven't blogged in FOREVER!  It is because the past month has been sheer madness.  Madness I say!  So this is going to be another HUGE out of control recap blog, which is NEVER quite as fun as "in-the-moment" blogs, but oh-well.  You are reading MY blog, so clearly you must not have very high expectations :) 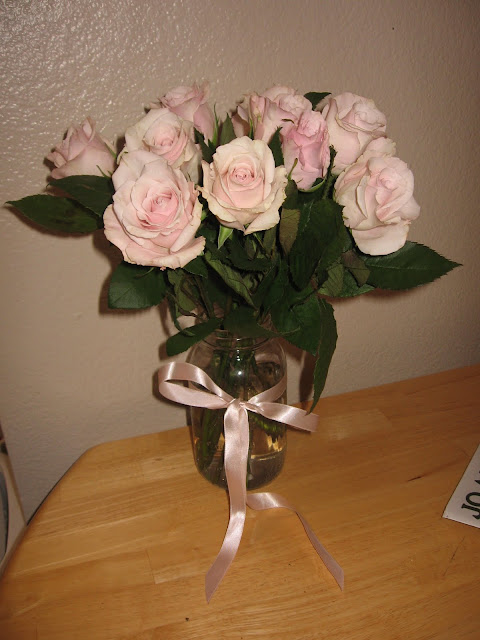 Ok, so before our "no vacation" TRAGEDY in my last post, we had our Anniversary. It was LOVELY, and Matt brought me home these pretty roses from work that night, which for my husband IS A BIG DEAL.  It was a great night, I had already given him the quilt I made him out of his old high school football T-shirts and the new T-shirts to replace his old ratty ones, plus some books that I got him.  And I had already gotten the MP3 player that he told me he wanted to buy for me and then I picked out. :)  But that night after work we had dinner and I gave him a card and he gave me flowers and we watched our wedding video and it was LOVELY!

I also FINALLY got around to making Isabel's baby quilt, so here are some pictures of my craftiness in the month of OCT.

Since I blogged last we had about a week and a half of total quarentine for Isabel during which I also wasn't feeling well.  My AMAZING friends Sarah and Vanessa dropped off a sweet care package for us which had movies and books and food and treats for us grown ups and coloring books and crayons and toys/games and all kinds of goodies to help us keep Lily entertained.  It was SOOO awesome, and really most of our (especially Lily's) entertainment that week and a half came from that care package.  SO THOUGHTFUL!

Anyway, it took about 2 weeks, but Isabel was fine, so Thanks to everyone for your love and concern for her!  We went to go and house sit for Matt's parents while they were in CA for about 2 weeks and that was GREAT, the girls loved it and so did we!  While we were there we had lots of Pre-Halloween Festivities!

We had a family pumpkin decorating night

And Matt and I went to a "Murder Mystery" Dinner party that our friends Sarah and Jeremy threw, which was SO much fun! (Especially right after being quarentined for 2 weeks!  :)  Thanks guys!  I made Matt and my costumes and it was so fun to be wearing a costume and getting into character, it has been WAY too long.  I REALLY miss the thee-at-ah.

Lily also had a costume party with some of her nursery friends, whe LOVED it and I love watching her as she gets to the age where they start wanting to be social and interact with each other.  SO fun!  It was also great because she got to wear her Halloween costume 3 different times this year.

Then we had a Ward Party/Trunk or treat the night before Halloween.

Then on Halloween I went to Thatcher with the girls since Matt had to work, I couldn't find my camera until the last day I was there, but EVENTUALLY my mom will send me the pictures of Halloween, and all the Grandkids, and of us going to feed the ducks while we were there.  I would say that this is a HINT to my mom to send them  to me, but she doesn't actually read my blog ever so... Anyway, it was also Fall Sing (the choir department's fall program) and EA's Homecoming that weekend, so it was SO fun to be in Thatch.  And Fall Sing was SOOOO good.  I forget sometimes how MUCH I love music!  It was also great to see my Family.  It was my oldest nephew's 9th birthday that weekend also.  And we went to my Grandpa's grave with some of his favorite treats for Dia De Los Muertos, and they finally got his headstone and all the rocks in.  My GG kept the flower arrangment that I made him there and it all looked so pretty!  I should have taken a picture.

Tuesday in Thatcher I had some things planned and was going to go home that night, but I woke up early in the am SICK.  So I slept most of the day and then drove home so I could go to the Dr the next day, where I was told I had the flu and was sent home on quarentine until the following tuesday.  So I am finally starting to not feel like death :)  Which is good.

Yesterday since I was officially off quarentine I decided to take Lily to her Gymnastics class.  I didn't really feel up to it (I am still just tired and worn out though not really sick ), I normally would have just skipped it, but it is cancelled next week and not having for a few weeks in a row is a long time for a 2 year old.  Anyway, I took lots of pics!

Halfway through gymnastics Lily started coughing a bunch and kept it up the rest of the day and so far today, and now Isabel has a cough too.  I am hoping that it is allergies or something and that they aren't getting sick now that I am finally getting better!  I swear we have had maybe 7-10 days TOTAL this past month where we are all healthy at the same time.  It has been OUT OF CONTROL, and I have been seriously praying and fasting for a healthy family!

Isabel is getting SO big SO fast.  It is hard to believe that she is only 2 month away from her first birthday!  She is pulling up on everything and so proud of herself that she can stand up by herself.  She was SUCH a more mellow baby than Lily was, but I think that she will be a more michievous toddler! 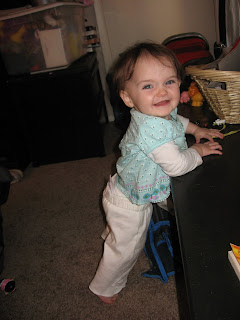 My girls are growing up and loving being sisters more and more, although it is also becoming a little harder to share sometimes!  They have both been REALLY good this past month, especially since we have been cooped up alot.  Here are some random pics from the past month.

I'll be honest, the past month has been EXHAUSTING.  I have definetly been slacking on all of my responsibilities and anything social or fun.  Even taking a shower a couple times a week has been an accomplishment.  Lily has watched WAY too many cartoons, while mommy "rests", and there have been VERY few days where the dishes weren't piled high in the sink, and the laundry in the bedroom.  I feel like I need a couple of days to just sleep round the clock in order to recover from trying to recover.

Luckily I have a wonderful husband and great kids who have been with me every step of the way, and who haven't even complained once about my severe exhaustion this month (they can probably sense that mommy is hanging on by a thread!).  Oh, and we were also supposed to get family pictures done last weekend, but do to sickness they were cancelled, so no Christmas cards for us.  Matt and I have never had family pics done in all our marriage, so we are going to have to reschedule something...sometime...

Anyway, if you read this all GOOD JOB!  I would give you a gold star if I had one!  I have a couple of videos that I wanted to post, but the little film strip icon is no longer on my toolbar and I don't have the energy to figure it out.  Mayber next time, or maybe a reader will be helpful and clue me in!  :)